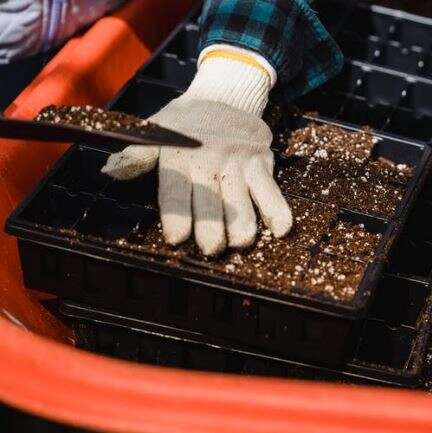 This calculator will provide the ratio of ingredients needed for making a DIY soilless potting mix and will break down the percentages in ratios (for mixing) as well as cubic feet (for buying).

The calculator will help you estimate how much to buy (in cubic feet) and how much to mix your soil to create your own homemade potting mix.  The amount of lime (or ash) needed will also be listed if you are using peat moss.

The calculator will give the amounts needed for starting seeds, for indoor houseplants (container plants), orchids, and succulents/cacti, as well as for organic potting mixes.  Select which best suits your needs.

What Is Soilless Potting Mix And What Is It Used For?

Soilless potting mix is a growing medium that doesn’t contain any soil such as topsoil or garden soil.  Why use soilless potting mix?  It’s extremely lightweight, and has improved drainage and airflow over traditional soil-based potting mix.

A soilless potting mix is also less likely to harbor pests and disease than a soil-based potting mix.  This makes it the perfect medium for starting seeds which need a sterile environment to get their start.  The lightness of the soil mixture allows the delicate new roots from sprouted seeds take hold.

It’s frequently used as indoor house plant medium, making the plants lighter, cheaper for suppliers to transport, and easier to move around a house.  A properly mixed soilless base reduces the likelihood that the soil becomes compacted over time.

Soilless mixes are also ideal for plants that are prone to root fungus and disease as a result of wet soil, or those that need to dry out completely between waterings.  Orchids, tropical plants, and succulents are best-suited for soilless mixes.

Organic commercial growers typically use a soilless potting mix.  By itself, organic compost does not have great water holding characteristics and its salt levels may be too high.  But when mixed with other organic and inorganic ingredients, it has the potential to provide a higher nutrient content.  The downside to organic soilless mixes, especially DIY, it that pH and nutrient levels tend to be inconsistent.

It’s recommended that organic potting mixes be kept warm and moist for a week or two before planting into them. Warmth and water allows microbial activity to process the soil medium so that excess ammona and organic acids in the compost can dissipate before they damage germinating seeds, tender roots, and young plants.

How Much Soilless Mix Do You Need

Determining how much potting soil you need is a good starting point before buying your ingredients.  If you only need enough soil for one or two small houseplants, you’ll probably save money buying it premixed.  But if you are potting up trays of seeds or filling a lot of pots, it makes sense financially to mix your own.

A good point of reference is that a standard-sized wheelbarrow holds 3 cubic feet.  You would need 3 cubic feet to fill 6 10″x12″ planters.

For flower pots and planters:

For one 12″ round planter, you would need 925 cubic inches of soil

For one 12″ tapered flower pot, you might need only 659 cubic inches of soil.

Visit our How Much Potting Soil For Flower Pots Calculator to find the amounts need for other planter sizes.

The Elements Of A Soilless Potting Mixture

Organic ingredients might include one or more of the following:

Depending on your needs, you can use one or a combination of organic ingredients in your potting mix.

Peat moss: Peat moss is considered to be an ideal base for most soilless mixes because it can hold both water and air. Its fibrous structure can hold 15 to 30 times its weight in water. The peat fibers also give it a large amount of pore space (80 to 90 percent of its total volume). It holds nutrients well, and it readily shares them with the roots, thanks to its slightly acidic pH. It has a pH of about 4 so lime needs to be added to get it closer to a pH of 6.

Coir: Coir can be used as a substitute for peat moss. Coir also has a high water-holding capacity.  It has a pH of about 6 and holds up to 9 times its weight in water.

Composted bark: Composted, shredded pine bark is a commonly used ingredient in commercial mixes. Bark doesn’t have the same moisture-holding capacity as peat moss, but it can greatly increases the pore space within a mix.  The bark also provides structural support for plant roots such as orchids and succulents.  It’s best used for mature plants that need to dry out between waterings.

Inorganic ingredients might include one or more of the following:

Depending on your needs, you can use one or a combination of inorganic ingredients in your potting mix.

Perlite: Perlite is a volcanic-rock that has been heated to produce lightweight white particles. It holds air and promotes good drainage but does not hold as much water as vermiculite.

Vermiculite: Vermiculite is a mineral that is mined from rocks.  It is been heated until it expands into small particles and has a shimmery, metallic sand-like coloring.  It holds large amounts of both air and water and also retains nutrients. Because its expansion, it can easily be crushed and is best used when your soilless mix won’t need to be packed down.

Coarse Sand: Coarse sand is used to increase weight and density to peat and bark-based mixes.   It won’t impact drainage as long as it is very coarse sand. Only coarse sand is recommended because fine sand (like the kind used for making concrete, used in sandboxes, or is at the beach) will reduce drainage.

If you are using spaghum peat moss, which is slightly acidic, you will want to add lime or wood ash to slightly increasing the pH level of your mix.

However, you should use caution because soil alkalinity of above 7.0 pH causes nutrients such as phosphorus, iron, boron, manganese, copper, zinc and potassium become chemically bound to the soil and become less available for plant use.

You would apply 5 pounds of lime per 100 square feet to raise the pH by one point.  UVM recommends an application rate of 8.5 lb. per cubic yard.  (The calculator will figure these amounts out for you).

According to the National Gardening Association, wood ash  can also be used to raise pH as a substitute for lime.  Wood ash contains up to 70 percent calcium carbonate, as well as potassium, phosphorus, and other trace elements.  Because of its very fine particle size wood ash is a fast-acting liming material, which could have negative consequences.  Wood ash should be limited to 2 pounds per 100 square feet and should only be applied every other year.  You would use 40% of wood ash compared to the ratio used for lime (the calculator will figure that out for you too).

When you’re mixing your potting soil, you probably won’t be using the same measurement as you did when you purchased each of the ingredients (which are usually sold by the cubic foot).  The exception is if you bought everything in one cubic foot bags; that would make it easier.  To make things more confusing, most DIY recipes call for mixing it by the bucket because it’s a much more manageable way to figure out the amounts.  So rather than measuring by cubic feet when mixing your potting soil, you would be measuring by ratio.

The calculator will provide mixing ratios (just to make your life easier).

How much potting soil do I need to fill a 5 gallon bucket?

If you are measuring your soil using 5 gallon buckets from home improvement stores, their 12.5 inch wide by 14.5 inch tall 5 gallon buckets hold approximately 1.03 cubic feet of soil.  If your bucket is a different dimension, you can use this calculator to find it’s cubic foot capacity: How Much Potting Soil For Flower Pots Calculator

For starting seeds, the recommended soilless potting mix is 1:1 screened peat moss and perlite.  PennState’s soilless potting mix recipe is half sphagnum peat moss and half perlite or vermiculite.  This is the easiest ratio to calculate because the amounts (whether quarts, gallons, cubic feet, etc) would always be equal.  One 1.5 cu ft bag peat moss mixed with one 1.5 cu ft perlite, etc.

For orchids and other tropical plants such as hoyas, the recommended soilless potting mix is 25% peat moss, 25% shredded bark, and 50% perlite.

For succulents and cactus, the recommended soilless potting mix is 50% peat moss, 25% perlite and 25% coarse sand.

According to FineGardening.com, the ideal soilless potting mix for most container plants (indoor house plants) contains 40 percent peat moss, 20 percent pine bark, 20 percent vermiculite, and 20 percent perlite or sand.  Although, 40% moss, 20% bark, and 40% perlite or vermiculite is also an option.

Organic compost soilless potting mixes are typically made with 20% to 50% compost by volume.  It’s best to err on the side of caution with manure-based compost, so the calculator uses 25% compost ratio in its recipe.  Again, any compost-based mix should be kept warm and moist for a week or two before being used for planting.

What About Fertilizer And Other Nutrients?

You may want to incorporate other soil supplements to your mix.  Add the ingredients that are specific to the plant’s needs or that the growing conditions require.

How Much Potting Soil For Flower Pots Calculator